True relaxation is a conscious and intentional activity. We’re working with a system that is designed to not let its guard down easily. The more we pause, the more opportunity we have to grow relaxed and present.

We practice pausing and returning to the present so that we can choose to respond to the people and events in our lives from a place that’s more calm, clear, and open rather than react from old habits or stories that no longer serve us.

The bottom line is: the more we practice on the mat, the more our practice is there for us in the challenging moments of our lives. Ultimately, our time on the yoga mat is the ‘pre-game’. Our real practice begins, when we step off our mat.

In my Livestream Meditation and Yoga classes this week we will practice pausing and learn simple tools to help us come back to our breath and body; to relax and instantly reset our attention in the present moment.

I hope to practice with you soon.

I’m a little biased, but I think my son has always had a great sense of humor. When he was four he started putting raspberries on his fingertips and then letting them dance to a silly song he made up (Diit-diit-DEE, diit-diit DEE) before eating them one by one. It always made me laugh.

He’s an empathic kid and tunes into the emotions of those around him. When he was little, if I was having a rough day or feeling a little tense or glum, he would go get raspberries and do his dance for me until I giggled.

Right now, I think we all could use a lot more four-year-old raspberry fingers.

Tensions are running high, people are afraid, angry, hurt, ashamed and frustrated – or all of the above and remaining in these states for too long is a sure-fire way to ignite conflict.

But there’s something that we all know intuitively that de-stresses us and de-escalates conflict – laughter and play.

Dancing, playing, chanting, laughing, singing, drumming, play fighting (and even when we do certain yoga postures together with a feeling of play and fun) run nervous system circuits that create what Dr. Stephen Porges, author of Polyvagal Theory, calls the “Play/Dance” state. The Play/Dance state of the nervous system combines activation of two circuits – the sympathetic nervous system (SNS) and the ventral vagal complex (VVC).

The SNS is the circuit of the nervous system that gets revved up when we feel fear. It’s responsible for the “fight or flight” response. The VVC drives social engagement and elicits the “Tend and Befriend” response. 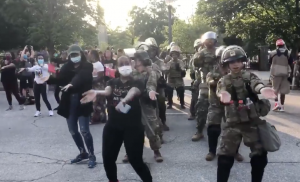 The National Guard doing the Macarena in Atlanta at a protest recently.

Can you see why the combination of the two might be useful for de-escalating? This state pivots between fight or flight and tend and befriend. It also appeals to our human need for connection, understanding and enjoyment. The Play/Dance state is essentially when we utilize some movement + a bit of excitement which = fun.

What’s particularly useful about this state is that it can help to de-escalate stress and tension between folks. Feeling frustrated and lonely? How about some dancing? Feeling ashamed or hurt by family member? Maybe tell a few jokes or do a little play fighting. Need to calm down and destress after a really hectic week? An asana class and chanting with friends?

There are so many possibilities.

In order to cultivate the Play/Dance state, protests often intuitively involve chanting, drumming, singing, puppets, and/or dancing. When you are in a group, addressing serious issues, it’s important to balance the tension, shame, pain and/or frustration with activities that activate the Play/Dance state. This leads to a reduction in individual tension, and an increase in feelings of connection, empathy, and being part of something greater than yourself in the group. The result is a de-escalation of fear and suspicion. 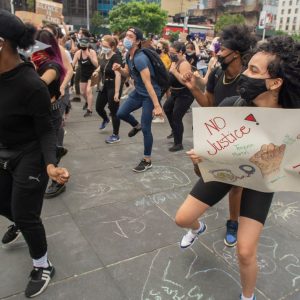 Also, when we move, sing, play, dance together we trigger mirror neuron networks that stimulate the insular cortex and help feel more empathic and see the and humanity in each other.

Now, if only politicians were required to do a little yoga or dancing together before they sit down to hammer out policy…