You can thank our four-legged friends for those tight hamstrings and knotty hip flexors. Have a seat on the floor to let your joints loosen. 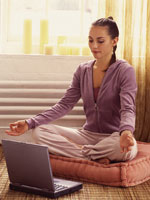 I spent countless hours during my first three decades of life as most Westerners do—sitting in a chair of some sort. From modern toilet seats to sofas to faddishly ergonomic office chairs, the idea was essentially the same: Sitting was something done off the floor.

That this might not be a law of nature—indeed, that this might go against the laws of nature—first occurred to me when I moved to Asia. Many Asians tend to feel most comfortable on the floor. Sherpas in Nepal often rest by kneeling in variations of Virasana (Hero Pose). The Chinese relax by squatting. Perhaps the most graceful sight I have ever seen was a Cambodian woman navigating a canoe by squatting effortlessly on its pointy bow and rowing with a single oar, alternating between left and right, in what looked like a flowing version of Pasasana (Noose Pose).

Whenever I sat down with people on the floor in Asia, the differences between my creaky Western body and theirs became evident within minutes. First I got fidgety. Then I started writhing. My discomfort perplexed and entertained entire villages. By living in a floor culture, they had kept their joints supple and their backs strong. By comparison, my leg joints felt like cement, and my back—though toned superficially from gyms and sports—was limp. I had all the telltale signs of being a chair-sitter: tight hip flexors and rotators, a flattened lower back, and weak abs.

I got sufficiently annoyed to change all of this only after I started practicing Ashtanga Yoga. It irritated me that I couldn’t get into Padmasana and its fun and inspiring variations in the primary series. So I asked my teacher what to do. He told me to bid chairs farewell and to sit on the floor in postures familiar to students of Paul Grilley’s Yin Yoga, such as Pigeon, Double Pigeon, and Half Lotus.

From then on, I spent at least an hour every day on the floor. Progress was measurable only by the month, but my connective tissue slowly relented. As it became easier to hold a pose for a long time, I would start holding it even longer. Soon I was working from the floor all day. To her credit, my assistant got over the initial shock and soon enjoyed this liberating eccentricity. Since I was not putting my full awareness into my breath, I did not call my new habit “yoga.” But it was making me flexible.

Within five months, I was in Padmasana. Moreover, my practice has become more fulfilling, my joints have softened, and my back has gotten stronger. The experience has left me more patient with my body and also more determined. Last July, I left Asia to open a new office in California. It consists of two tatami mats and no chairs.