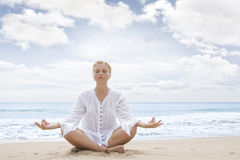 At my first formal interview with Suzuki Roshi, I didn’t know what to say. Perhaps I really could not think of what to say, or nothing I was thinking was worth saying. I was young and sincere, and I wanted to make a good impression. After a couple of minutes of sitting quietly facing each other, I began to relax and Suzuki took the initiative.

“And what’s the problem with thinking?” he asked.

That stumped me. When I looked directly for the problem with thinking, I couldn’t find it. My fallback position was to tell him the do’s and don’ts of meditation.

“You’re not supposed to think in meditation,” I said. “You’re supposed to quiet your mind.”

I had to agree with the Roshi, who then explained that the problem with thinking was not thinking per se, but thinking that was stuck.

When people tell me meditation is “difficult,” what they really mean is that quieting their minds or stopping their thinking is what’s difficult. And just as I was as a new student, they are extremely reluctant to examine the issue more carefully. It’s not so simple. And when it is not simple, the simplest approach is to stick to the rules.

I’ve known people who have seriously devoted themselves to “not-thinking,” and when I ask them if they called to let their friends know that they would be late, they say, “No, I didn’t think of that.” This is not a new phenomenon. An old Chinese Zen Master once said, “Some of you are taking me literally when I say, ‘Don’t think,’ and you are making your minds like a rock. This is a cause of insentiency and an obstruction to the Way. When I say not to think, I mean that if you have a thought, think nothing of it.”

The capacity to think is an essential element of our lives. We need to plan, make decisions, and communicate. The problem is not that we think but that we haven’t had a truly new thought for most of our lifetime. In other words, our thinking is fixed.

For example, once I believe no one likes me, do you think I’m going to let anything change my mind? No way. I can explain any contradictory evidence: You don’t know me well enough; if you really knew me, you wouldn’t like me; you are just pretending to like me so you can get something out of me. Thinking tends to be for and against—and to be intolerant of thoughts that do not obviously concur. This is often referred to as “the disease of the mind is to set mind against mind.”

Rather than eliminate thinking, you could say that one of the basic skills to develop in meditation is to be able to hold and sustain contradictory thoughts—calming the impulse to eliminate the opposition. One obvious example has to do with sitting still. You want to sit still, so can you have the thought to move and go on sitting still? Or do you have to do what the thought says?

If sitting still means eliminating the thought of moving, you may find meditation difficult—because the way to remove thoughts is to tighten muscles, and this makes sitting quite painful. Holding on to a thought, such as, “I am not going to move,” also tightens muscles. This is what you are busy doing a good deal of the time, so if you are serious about releasing and calming the body and the mind, thoughts are going to be popping up one after the other. The trick is not to mind.

You could say that the point of meditation is to liberate thinking, and understanding this, you are ready to examine what to do with thinking during meditation. There are two basic strategies. One is to do something other than thinking and to use your thinking to help accomplish that. The other is to give your thinking something to do other than what it usually does.

So what do you do with thinking during meditation? This first strategy, which is basic to Buddhism, especially Zen, emphasizes posture and breathing. With energy and commitment, give your attention fully to them rather than to your thinking.

This means emphasizing a straighter spine, including the small of the back curved slightly in and the neck long. But don’t be shy about asking your thinking to lend a hand when needed. Is the neck shortening and the chin jutting forward? That’s a red flag that thinking is in full bloom, and when your thinking notices that, lengthen your neck. You can also have your thinking count the breaths, say on the exhalation, or note the breath as it proceeds in and out.

The second strategy involves giving your thinking a task.