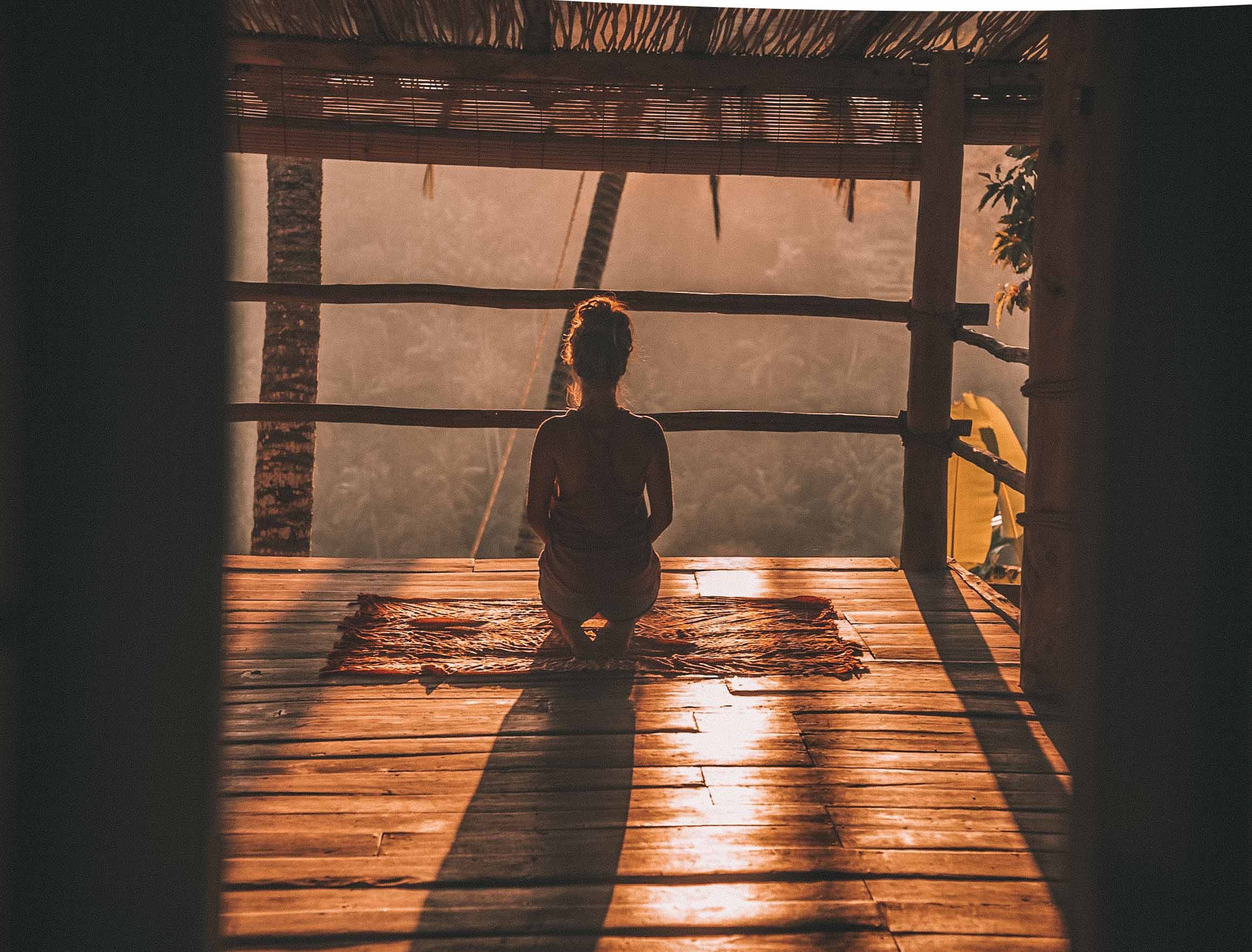 I’m 28 and backpacking around India with my hot German boyfriend. We go for long, twilight swims in the warm waters of Kerala. We sit and read novels at cafés in Goa. We explore the temples in Madras and buy each other tiny earrings at tourist gem stores in Ernaculam. We take ridiculously long train rides across the country. We drink chai out of unfired clay cups and sleep in whatever cheap hotels are recommended in our Let’s Go guide books. 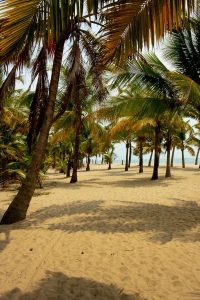 But eventually he needs to get back to his life in Germany, and I wake up from my romance trance and remember that, oh yeah, I had come to India for something different actually, when I got distracted by this tryst.

We part ways and I, in what feels like a hilariously ironic next move, head to a women’s ashram to study with renunciates.

He calls me a few days later to tell me he has contracted hepatitis and is wondering how I’m doing. I’m fine. It’s 1994, so he calls the only phone in the place – in the head nun’s office.  But as I come to answer the phone, she cocks an eyebrow and purses her lips. After I put down the phone she asks, accusatory and frowning, “Who was that?!”

It’s no-nonsense, this place. Women don’t even dance kirtan in mixed company at the main men’s ashram nearby, for fear of being labeled “loose.” 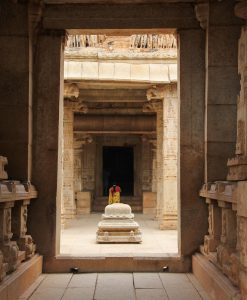 And I also like yoga and spirituality and I’m willing to give this acetic lifestyle a shot for a while.

It turns out I really resonate with ashram lifestyle – lots of meditation, chanting, asanas, and pranayama, simple meals, lots of time to talk to other women and study. With a big needle and coarse thread I learn to make garlands of marigolds. I learn to make dal and chapati. I learn Sanskrit chants and mantras. This life is peaceful and deep, which gives me a sense of contentment and purpose.

At a lecture one of the renunciates talks about Brahmacarya. She explains that many people think it means “celibacy.” I’m okay with having a spell of celibacy, frankly, LOL, I’m a little worn out. But then she says that although they are celibate renunciates, their guru taught that brahmacarya means “unity” or “seeing everything as a manifestation of divine consciousness.”

Wait a minute, I don’t get it. How did you get from celibacy to seeing everything as a manifestation of divine consciousness? Her response is something along the lines of – you ask too many questions.

When I returned to the states I continue studying yoga. Over the years I’ve collected many translations of the Yoga Sutras.

So, let’s do a little comparative study here. 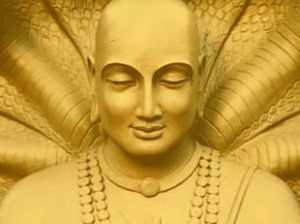 Here are 7 different authors defining brahmacarya, mentioned in Yoga Sutra 2.30 and fleshed out in 2.38:

“By one established in Continence, vigor is attained.”

“Upon the establishment of celibacy, power is attained.”

As someone who worked in a nursing home facility for 5 years, I always think about “continence” as meaning “not having a leaky bladder” – and that’s the way it’s used medically. However, apparently, Aristotle used the word continence to mean sexual restraint. Perhaps there was some confusion back then about what comes out of men’s penises? Or perhaps the word “continence” is just convenient when an author just wants to avoid to the taboo topic of sexuality altogether?

“By one established in continence, vigor is attained.”

“At its best, moderation produces the highest individual vitality.”

“Devoted to living a balanced and moderate life, the scope of one’s life force becomes boundless.”

“When walking in awareness of the highest reality is established, then a great strength, capacity, or vitality is acquired.” 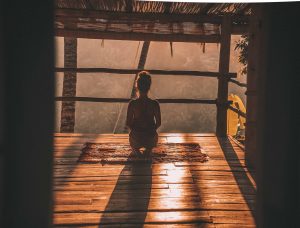 The obvious problem with translating brahmacarya, as “celibacy” or “continence” as one of the yamas is that it’s confusing for folks who are not leading the life of a renunciate but want to practice Raja yoga.

So, some authors have jumped through hoops in trying to make “celibacy” more palatable by talking about things like “moderation” and “control” – which are good ideas, but don’t actually cut to the heart of the principle, or explain its etymological origins.

Because celibate renunciates are such an ancient part of Indian culture, there is a lot of information about how exactly to manage those biologically imperative urges. The advice includes eating vegetarian food, fasting regularly, avoiding drugs and alcohol, and some pretty intense encounters with buckets of ice water. Doesn’t mean the renunciates are always successful – you’ve heard about the scandals. While there is a science to celibacy and some folks manage to pull it off, clearly, it’s not for everyone. 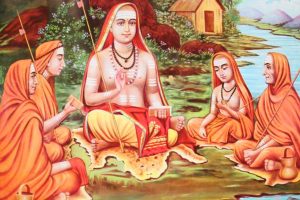 When I was staying at the women’s ashram I couldn’t help but wonder what would it be like to be a renunciate, Do I have that in me? What compels someone to swear off sex? Could I wear those orange robes, cut my hair, and dedicate my life to a greater cause?

Nope. Not my path.

So, out of the seven translations I listed, Swami J’s “walking in awareness of the highest reality” makes the most sense to me as a non-renunciate or “householder.”

It’s basically the same definition that I was taught at the women’s ashram. Here we can think about the first part of the word as referring to Brahman or the Oneness principle. And acarya, (which is related to the English words “chariot” and “car”) as meaning “to go” or “how you go.” Acarya BTW, also means “the one who teaches by example.”

So, you could say that brahmacarya means “God is my co-pilot.” Which just goes to prove that the mysteries of life are always available on the back of a VW bus. 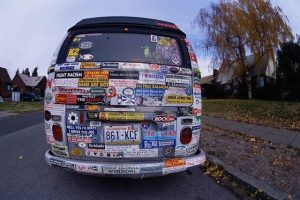 Brahmacarya is a powerful practice. It reminds me that there is a benevolent higher power constantly guiding my life. It helps me see the meaning of my journey. It helps me find opportunities to remember that everything I encounter is a manifestation of Oneness here to help guide me further along the path. The more time I spend in that state of awareness, the more peace, ease, and contentment I can find in my life – regardless of the storms raging around me.

The definition of brahmacarya as “walking in awareness of the highest reality” also makes sense in the context of the yamas which are a set of principles that can guide me in how to show up in the world. I think about ahimsa (non-harming), satya (honesty), asteya (non-stealing), and aparigraha (non-hoarding), as aspects of walking through the world in awareness of the highest reality. They are all satellites orbiting around the idea ofbrahmacarya. If I walk in the highest reality then I lose my compulsion toward harming, lying, cheating, and hoarding – because I see the wholeness everywhere and there’s no need to acquiesce to the fear that prompts those thoughts, feelings and/or behaviors. 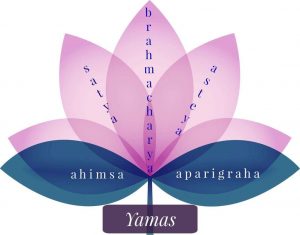 Sexuality, on the other hand, is largely a private, intimate human experience. Unless there is a mental health pathology, most people don’t spend much time or energy trying to not have sex with everyone they meet.

My German boyfriend was a rebound. He showed up soon after a miserable breakup and helped me overcome grief and deep disappointment. At the time it felt as if a “higher reality” had showed up in the form this very sweet, kind person to help me get through what I needed to at that time – to let go of the past, to refocus, and to move on.

I felt as if a “higher reality” was there walking besides me, guiding me, and helping me through. And all these years later I know that the higher reality is always there, just waiting for me to turn my too often distractable, volatile attention towards it.

Just to bring a little closure to my tell-all love life story, a couple of years later I met my soulmate and we’ve been happily married for 22 years. Our meeting was something of a brahmacarya miracle, but I’ll save that for another blog…