When Anna’s boyfriend of five years broke up with her, she was devastated. He had given every indication that he was committed to a shared life, right down to the proposed names for the children they’d planned to have. When he admitted he couldn’t deliver on any of their dreams, Anna (not her real name) did her best to move on. She painted her apartment, recycled her furniture, and swept out every reminder of him in a determined preparation for a new phase of life.

But deep down, she couldn’t accept the change. “I kept hoping a coconut would fall on his head and he’d come to his senses,” she recalls. She raged at the upending of the life she’d envisioned. She sabotaged new relationships by comparing them to life with her ex. For several years she fought the reality of his departure with all she had, and in the process shut herself off from new opportunities, from happiness, from peace. “I was so in the thick of it, I couldn’t see any doors opening. I was just banging into all these closed doors.”

Erik, it would seem, already knew that. While working a hodgepodge of construction jobs, he had realized he needed a change and started rethinking things. “I was driving by Casper’s Hot Dogs, and all of a sudden it hit me: I wanted to do architecture,” he says. It took months of strategizing, but a major life warp was set in motion. Both Erik and his partner, Melissa, made plans to become grad students. Their house in California would be rented out, the relationship made long distance, as Erik moved to Philadelphia for the University of Pennsylvania’s prestigious architecture program. A few months later, Melissa would head to New York’s Pratt School of Art and Design. Erik was thrilled. After a period of professional uncertainty, there was a plan.

And so, after moving east, Erik accepted the impossible hours, the sleep deprivation, and the separation from Melissa with resolve. All told, his big life change was chugging along nicely—right up to the moment a bigger one sneaked up from behind. He’d been gone about six weeks when Melissa called to say she was pregnant.

Erik greeted the news with joy. He didn’t kick and scream about the complete disruption of his life. He simply decided to come back to California, start a family, and leave Philadelphia behind. His hard-earned blueprints had been ripped to shreds—by something wonderful, to be sure—but ripped to shreds all the same. And yet he was OK.

So, how is it that when life is spun around by circumstances, benign or otherwise, some people flail, while others sail? Why do some of us wallow in that place where we’re so shocked and unhappy about an unexpected turn of events that we resist reality and find ourselves mired in bitterness or fear or hopelessness? Instead of accepting change with grace, we dig in our heels and suffer through each day of things not being what we think they should be. What’s the secret to riding each new wave gracefully—regardless of whether it deposits you gently on the beach or wallops you down to the seafloor?

“I hear a lot of people say that change is exciting, but they mean a specific kind of change,” says the Frank Jude Boccio, a teacher of yoga and Zen Buddhism in New York. “We all have an aversion to change that we’d rather not have. Certain change is appreciated, and some is not.”

The funny thing is that as a culture, we seem determined to celebrate change. “Change is good,” we tell each other, and, “Everything happens for a reason.” Thoreau himself volunteered, “All change is a miracle to contemplate.” Yes, we praise the virtues of change religiously—until some unwanted, unscripted change occurs. Then, mostly, we long for permanence. For all our professed faith in the benefits of transformation, we are a species that falls to pieces upon learning the salmone fresco is sold out. Generally, we cement where possible and panic where not. The smallest nudging of our routine can send us into a tizzy, while big disruptions send us into therapy.

How can you learn to accept change with equanimity, absorbing each phase in stride and learning from each new experience? The answer may come from dealing with change in three distinct stages.

When any unscripted change comes down the pike, there’s an overwhelming feeling of losing control, and that’s perfectly normal—and also perfectly delusional, says Herdis Pelle, a teacher at the Berkeley Yoga Center in Berkeley, California. “We’re moving into unknown territory,” she says. “Deep down, we’re never in control.”

Pelle, who came to California by way of Denmark, England, and Scotland, says she bases much of her teaching on the changes she’s experienced in her own life. It’s not that she managed to get a better grip on those changes over the years—it’s that she accepted the impossibility of any real grip in the first place.

As for Anna, it took her three years to let go of the feeling that her preordained future had been wrested away. Eventually she recognized that had she and her ex stayed together, there were no guarantees that life would have unfolded as she’d wished. With or without him, she realized, she didn’t have control over life.

No one does. That moment you fantasize about? When the bills are paid, the roof stops leaking, the phone’s not ringing, and you soak in the caught-up-ness of it all? That’s when the dog runs away. Or the girlfriend gets pregnant. Or the tornado touches down. Life doesn’t give you breathing room, but if you stop grasping for control of the uncontrollable, you can learn to breathe through it all.

Of course, just as you can dread change disproportionately, you can also overly invest in it, betting on a new job, mate, or baby to erase your troubles. Such eagerness for change may look like the flip side of resistance to it, but really it’s another vain attempt to control your circumstances. “You think the change is going to be miraculous and solve all your problems,” says Anna, who has, at last, found that the best way to approach change in her life—wanted or not—is to neither fear it nor think it’s a cure.

Once you’ve accepted your utter lack of control, it can still take some doing to accept the emotions that often accompany a sudden unraveling of your expectations. Even minor setbacks challenge us. Take Frank Jude Boccio’s experience of returning to his Hudson Valley home after time away; the famous fall colors had just faded. “I was really disappointed,” he says. “I found myself wishing I could change it back, or have come home earlier. And that wasn’t right.”

By that, Boccio doesn’t mean that his disappointment was unjustified—that he should learn to see winter’s colors as just as pretty as autumn’s. His idea is more nuanced: you can be disappointed with certain changes, but you accept that disappointment the same way you’d accept delight.

What does that mean? Surely you can’t be expected to rate disappointment the same as delight. No, says Boccio, but you can separate your feelings from your response to them.

As for Erik, while he’s nervous about impending parenthood, he’s accepting his nervousness instead of worrying about how he’ll pay the bills or getting angry about having to leave his program.

By distinguishing your core emotions from those that pile on afterward, you don’t limit your emotional life; on the contrary, you unclutter it. As Boccio says, it’s the clutter that leads you away from your true experience and into murkier territory.

Mitra Somerville, a teacher at the Integral Yoga Institute of New York in Manhattan, looks at major life changes and their constellations of angst in terms of what is, and isn’t, permanent. Your duty, he says, is to recognize that in the midst of radical transformations, the Self remains stable. If you can come to an understanding of this—through asana, breathwork, meditation—you can soothe the discomfort brought on by external changes. “The yogic thinking is that there’s part of us that’s unchanging—the spiritual part of us that has peace and joy and love,” he says. “The nature of the world, however, is in flux.”

Learning to make peace with life’s calamities—lost jobs, romances, dreams—does not mean you have to be passive.

“Sometimes we try to provoke change in our lives,” Boccio says. “Rather than just be with sadness, anxiety, or anger, we want to change it. And that inability to sit with what’s happening isduhkha, suffering.”

But does that always mean choosing inaction? What about when there are wars to resist, house fires to flee? Are you meant to be sanguine about any old change of plans that comes along? “If we listen to our hearts, in that deepest silence we will be guided toward the appropriate action,” says Pelle, who agrees that certain events require out-and-out protest—and that yoga helps you know which ones.

“We practice so that we can be guided from within,” says Somerville. In stilling your thoughts, you free up a more reliable inner wisdom. “The more peaceful your mind is, the clearer and stronger your intuition is, and the better able you are to make the proper decision.”

As Melissa’s due date approached, Erik was clearly at peace with the inevitable maelstrom ahead, despite upending everything in order to go to school, and then tearing that plan up as well. “It’s funny. The more time I had with this newest change—the one that took me away from the original change—the more I came to accept it,” he says. He still intends to pursue an architecture degree, but he’s clearer about that intention. “I came to see that I’ll transfer to another school [near home], or we’ll head back to Philly if we have to, or maybe just that I’ll get to it someday.”

A deeper realization about change had come to him, one that saw a kind of balance of permanence and impermanence in daily life. No matter how much the circumstances of his life turn upside down or sideways, he can be in touch with a core that’s always right side up—the essence of his being. Being in touch with this core, in turn, provides the clarity to navigate life’s loops with calmness.

“It’s good to change things now and then,” Erik says. “Not because change is inherently good, but because changing something about your life makes you realize that other things won’t change.” 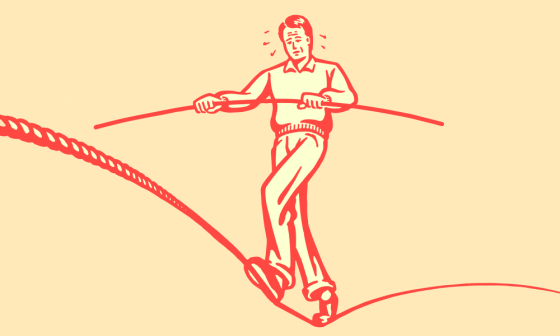 Prepare for life’s ups and downs with a daily practice. Frank Jude Boccio offers some ideas for a change-friendly inner life.

Accept Impermanence: Every morning, I repeat a gatha (mindfulness verse): “Great is the matter of birth and death; impermanence surrounds us. Be awake each moment; do not waste your life.” Much of my practice has to do with aligning myself with that. Then, ideally, my action comes from the situation, rather than from a false perception of what’s happening.

Practice Mindfulness: Come back to the present moment. The Buddha points out that you can be happy in a pleasant situation, but then it’s all too easy to lose yourself in the pleasure.

Take a Breath: When faced with a change, pleasant or otherwise, I try to tune in to my breath, and how I’m feeling in my body. Tuning into the breath gives me time to respond better to an unpleasant situation.